Another too-cold too-long northwestern Pennsylvania winter will be coming to a close – hopefully earlier than last spring when ice-out was not until around April 5. I am ice-weary at this point and looking forward to the Big Melt in order to launch my boat and cast once again!

Traditionally, the harbinger of spring for anglers is the first crappie bite. That first crappie bite happens much earlier in northern states than the month of May when hordes of fair-weather anglers descend onto area lakes. What I’ve learned from crappie-fishing experts over several decades is this: crappies can be caught within days of ice-out…perhaps even while ice cover remains on the main part of the lake.

If you can find fringe water that is ice free somewhere around a NW PA lake in mid-March, you can probably catch crappies. The first areas on a lake to lose ice are typically shallow black-bottom areas, including canals, backwater marsh-like areas, extremely shallow well-protected bays and even marina basins in some instances. Heck in March, I’ve witnessed anglers catching crappies in a still-water road culvert hole of a small tributary just upstream of a still frozen lake.

However, this early movement is not a spawning run. Crappies simply follow minnows into the warming shallows to feed. When spawn time arrives in May, many of these fringe waters spots will be completely void of crappies. The shallow water ice-out bite usually lasts only a couple weeks before minnows and crappies fall back to slightly deeper water.

Although these shallow-water crappies are feeding, they are not chasing. In the chilly water after ice-out crappies are fairly stationary – moving only minimally to suck in a minnow or zooplankton. Being more active on sunny days, crappies seem to relish soaking up solar heat while still positioned close to cover. 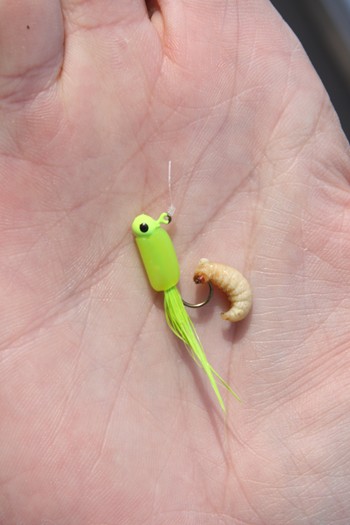 Stumps, deadfalls, brush and last year’s decayed vegetation are what you need to locate in depths from 2 feet to about 4 feet.

What’s the best thing to use? A lightweight small profile jig (marabou, hair, soft plastic teaser tail, plastic split-tail) about 1 to 2 inches in length tipped with a small minnow or a couple maggots is all that is needed.

Use of a bobber to suspend the bait at a set depth is the way to go. You do not want the bait to be lost in a mucky bottom. Furthermore, you don’t want to move your bait very much, so a bobber allows the bait to remain in one spot for an extended time, or retrieve it very, very slowly with frequent pauses.

During ice-out crappies are not in a chasing mood and usually need an extra “scent” incentive to move on your bait. If you are not tipping your jig with live bait, I strongly recommend the use of a scent product specifically for crappies such as Bobby Garland’s Mo’ Glo Slab Jam (see Crappie Tested). Or use both live bait and scent, as I do!