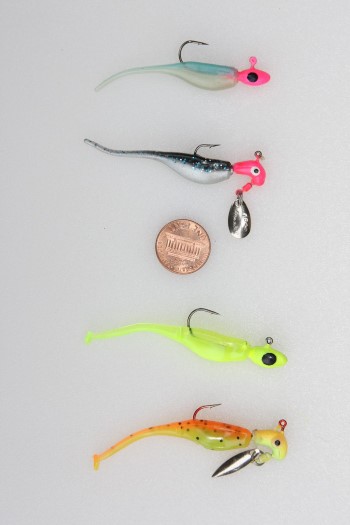 The Baby Shad on a 1/16-ounce Road Runner Head catches crappies one after another when the fish are feeding. Cast out, count down to the desired depth and retrieve very slowly, with an occasional 1 or 2 second pause.

And the Baby Shad becomes my go-bait when crappies get lockjaw. Under tough conditions, the tiny shad profile works best on a 1/24 or 1/16-ounce Mo’Glo Head, often fished below a float while employing a slight rod twitch. Crappies simple slurp it in.

The newer Baby Shad Swim’R has a bit more action due to a swim tab on the tip of tail, as well as scent pocket. I prefer to fish the 2.25 inch Swim’R on a Road Runner Head when the water is off-color or when fishing deep – two situations where a large profile is a better idea.

I generally prefer one of the more natural shad or minnow patterns for both baits, except when the water is stained; then I’m likely to switch to something brighter and bolder.

Be sure to have plenty of Bobby Garland Baby Shads in you tackle bag. Check them out at www.bobbygarlandcrappie.com.