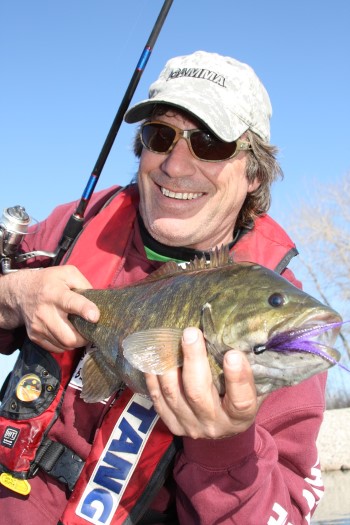 Every self-respecting bronzeback angler has a Bucket List of smallmouth bass waters they want to visit. I surely do. Many of them I have been able to check off the list, including today’s destination – Sturgeon Bay, Wisconsin. Actually, it’s more than just Surgeon Bay. It’s all the bays and harbor inlets on Wisconsin’s Door County Peninsula just northeast of football city of Green Bay.

Green Bay (the water) is a large, deep bay off Lake Michigan. Door County Peninsula is a finger of land that separates Green Bay from Lake Michigan. Sturgeon Bay (at the town of Surgeon Bay) is the largest bay-on-the-bay. But when it comes to smallmouth fishing, you do not want to count out any of the smaller inlets on Door County Peninsula, including Little Sturgeon Bay, Egg Harbor, Fish Creek and Sister Bay on the west side of the peninsula, and Moonlight, North and Rowley Bay on the east side (Lake Michigan side). Together with the shoals around Washington Island on the north tip, this stretch of water comprises one of the best smallmouth fisheries in North America.

Bassmaster Magazine named Sturgeon Bay #1 on their Top 100 List of Best Bass Fishing Destinations for 2014. While I’m not going to rank what I consider the top smallmouth fisheries because each is so unique, I will disclose what puts the Door County Peninsula bays on my list.

First, it’s the high percentage of BIG smallmouths. For years I thought the Eastern Basin of Lake Erie gave up an incredibly high proportion of five-pound-plus smallmouth. That was before I visited Door County. Oh my! If you want the best crack at a six or seven pound smallmouth today, head to Wisconsin’s Door County.

Second, there is a progression of warming in the bays as you travel up the Green Bay side and then flip over to the Lake Michigan side of the peninsula. Due to gradual warming of one bay after another, the sequence of pre-spawn, spawn and post spawn periods extends from the first week of May(bass opener on Door County) to late June. And the locals tell me that smallies don’t hit the beds around Washington Island area until July – which is when Washington Island bass season opens. Focusing on pre-spawn bass moving into the bays is the best time frame for a truly BIG bass. And due to the high number of bass, smallmouths move in to different spawning areas in waves. 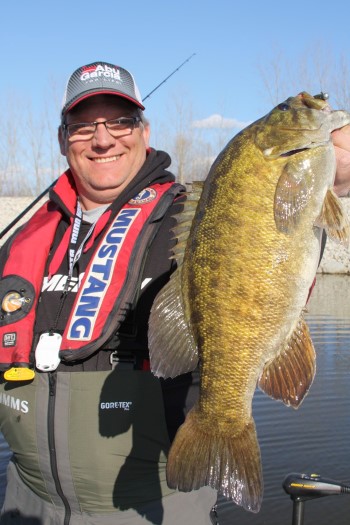 Third, the bays and inlets of Door County are accessible with boat ramps in each sheltered community. No need to make long runs on the open lake. Trailer to where you want to fish, choosing the area based on what the bass are doing. Being a summer tourist mecca, it’s not difficult to find lodging in Door County during May and June before the frolickers arrive.

Fourth: This is an awesome scenic area. It’s worth a visit to simply take photographs!

My first trip to bays of Door County was in 2011 with Matt Bianchi, sales manager for Uncle Josh/Kalin Baits. We went in early June. Finding bass on beds in Surgeon Bay on day one, we traveled north to Sister Bay to find bass just moving in. Prespawn is the better bite. While we didn’t score a seven pounder, we had a bunch of fours, fives and near sixes on the Kalin Grub, Kalin Tube and assorted hard jerkbaits.

In 2014, Dan Elsner, owner of Get Bit Baits, invited Jeff Samsel and me to come up for the opening weekend of bass season in early May. “This is time when you have a chance at real trophy smallmouth in the 7 pound plus category,” explained Dan. “The very first ones moving into Sturgeon Bay are BIG.”

We knew timing was everything. I usually end up going a tad too late, so I jumped at the “early” chance to be there. However, the winter of 2014 didn’t want to surrender. When we arrived in Wisconsin, large ice sheets were still present on Green Bay. The waters of Sturgeon Bay were too cold. However, by switching to the Fox River and Oconto River in the southern portion of Green Bay, we managed to catch a few good bass and walleye on hair jigs to salvage the trip.

So if considering a trip to the Bays of Door County, I would not pull the trigger until mid-May to be on the safe side. And given the availability of later-warming bays further north on the peninsula, you are in a better position to hit some great fishing. To obtain lodging information visit http://doorcounty.com.