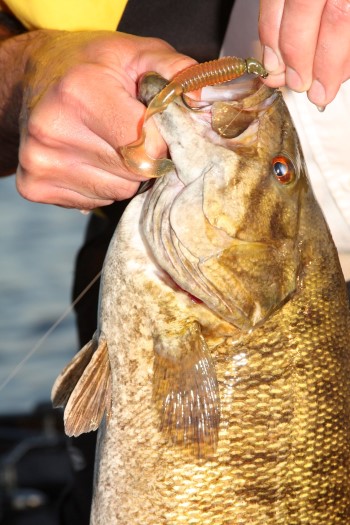 One lure synonymous with springtime smallmouth bass on the bays of Door County is the floppy-tail grub. Some anglers refer to it as a curl-tail, twister-tail or swim-tail. But I call them floppy-tail grubs, and I’ll explain why shortly.

For many years, the most recognized grub on Sturgeon Bay and its affiliate bays was the 5-inch Kalin Lunker Grub. More recently, Get Bit Baits introduced their 4-inch Hyper-Tail Grub which quickly became a respected competitor in the arena of floppy-tail grubs.

I had been using a 4” Mister Twister grub before I had ever heard of any other grub. But as soon as I was introduced to the Kalin Grub, I switched. The reason was simple – the wider, softer, floppy tail of the Kalin.

The Lunker Grub and Hypertail grubs’ tails wave like a flag in the breeze with the slightest movement of the bait. This action is very critical to the success of a particular retrieve used in the cool water of pre-spawn. Get Bit Bait’s Hyper-Tail grub incorporates a tab on the end of the curl tail which helps enhance the action.

Okay, here’s the retrieve that has works so incredibly well across the Northern Tier as smallmouth begin transitioning to spawning areas: slow rolling. You’ve heard of slow rolling a spinnerbait, well, this is slow-rolling a grub. Simply let the grub find bottom after the cast then begin a very, very slow retrieve, keeping the grub just above the bottom. Pause the retrieve and let the grub find bottom again if you believe the grub has climbed in the water column.

As smallmouth bass move from deep to shallow water in the spring, they are hugging the bottom. Although hungry, smallmouths are not aggressively chasing bait – but will certainly snatch a would-be bait fish that comes too close. This is the retrieve that will likely catch your biggest fish.

In my opinion the color of the grub is very important. I usually start out with a clear/silver flake or smoke colored grub in the clearest water. If the water has a hint of color, I will go with a Root Beer or Amber colored grub. In stained

I use a 7-foot #2 power G Loomis Spinning Rod with Shimano Sedona Reel. The reel is spooled with 10-pound Gamma Torque braid with a five foot leader of 8 pound Gamma Edge. The grubs – either Kalin or Hypertail – are rigged on Bass Stalker Spot Stalker Heads with the wire-guard removed. Depth and wind conditions determine the head size – 1/8, 3/16, 1/4, 5/16 or 3/8-ounce heads are all in my box.